Succubus Draining Maze is a short spinoff of the hit text-based RPG Slime Girl Caverns (https://elizzyviolet.itch.io/slime-girl-caverns). The stories are completely different, but the games use some of the same mechanics.

Note: this game is extremely short and is not meant to be a longer game like Slime Girl Caverns.

In this game, you're a level 40 chaos mage, but if the succubi who kidnapped you have their way with you, you might not remain a level 40 chaos mage for long! Learn the best way to use your powers to defeat these demon girls, fight your way out of their bizarre maze, and avoid having the power fucked out of your body!

~Nearly thirty random encounters between you and the exit.~

~A whole load of nonsense, in addition to special endings for being defeated by each enemy.~

1.02 update: Fixed small text inconsistencies and pointed out the existence of the scroll bar for new players.

Wow this is awesome!

I love the idea of giving you all the spells etc at the start and then you having to survive. Though I did manage to finish first time around, it wasn't the easiest time, and if I hadn't got lucky with the final boss I probably would have been in trouble.

I'm also interested to play again to see what new stuff is out there.

My only miner gripe gameplay wise, is it would be nice to get some stat tracking and/or achievements, or maybe even some rewards for subsequent playthroughs (I did wonder if the three succubi you could summon at the end would be ones you'd encountered in the game).

Especially because if there was say a tracker for games lost, even your sacrifices to the all powerful god Aaranjee, lord of random numbers would have a point, lol.

I've no problem with a bit of naughtiness now and again, albeit I play games like this more to enjoy pounding demons, ---- no not that sort of pounding! than to titivate my libido.

but for succubus draining maze particularly, it probably  wouldn't take much to turn this into a simple monster slaying fest.

As I said, I've no problem with erotica myself so long as there's a game in there, but over on audiogames.net, there are several younger gamers who have said they'd enjoy the rpg aspects, but aren't comfortable with the adult side of things.

obviously, in slime girl caverns it's built into the world, but I could see a vanilla version of succubus draining maze, with all the great mechanics, even succubae as enemies, but things staying pg13.

Indeed, both slime girl caverns and this game feature some of the most tactical and unique combat I've seen in a text rpg, and it'd be nice to share it with a wider audience if possible.

of course if, as the blog post said you'd prefer to focus on standard fiction and want to give game development a break for a while, fair enough, though as I said, the design, tactics and gameplay here rock! 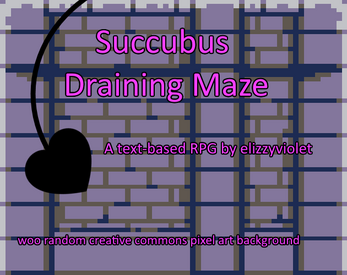